In this LibGuide, you will meet many colorful people, including the murderous Lobster Boy, Grady Stiles, Jr., and a new generation of performers bringing sideshow entertainment to modern audiences.

Christopher (Chris) Bonadio is, as of this writing, an assistant librarian at The Ringling Museum Library.

Welcome to the research guide for circus and carnival (midway) sideshows! What are sideshows?  Are they still around today?  Step right up, don't be shy, learn more, and enjoy the show!

For Angelica Velez (stage name: Insectavora), a fire-eater and dancer with the Coney Island Circus Sideshow, her sideshow act is “very special,” more than just a performance, it is an opportunity for people from all walks of life to come together, laugh, and be happy.  It is an act of fellowship.  According to circus expert, Joe Nickell (2005), sideshow content can include: girl shows, dancing women; illusion or magic shows; animal shows or menageries; life shows, where one can see “pickled punks”—human or animal fetuses plunked in jars of formaldehyde.  Styles of sideshows can differ, too.  Single-O sideshows only have one attraction.  Ten-in-ones, better known as freak shows, have multiple attractions.  Harold “Crazy Cobra” Bone (died 1997) was a magician who traveled with circus and carnival sideshows.  He said some sideshows have Athletic Shows, or At’ Shows.  One could even pay a little extra for an annex to a sideshow with adult-only content (Bone, 2001).

Sideshows, as the name suggests, are “adjunct to the main show” with various kinds of acts (Nickell, 2005).  “I think the best solution [to defining the term sideshow] is to recognize that sideshow has come to mean ‘a show with the characteristics of a sideshow’” (Nickell, 2005).  For example, a ten-in-one typically has a banner line, a bally platform with a talker, show tent, and ends with the blowoff, when the audience exits the show (Nickell, 2005). Most sideshows are associated with midways, defined as a carnival “adjunct to a circus, fair, or exposition” (Nickell, 2005).

In recent years, sideshows have become much less common.  Emphasis is more on performance art, like snake handling and fire-eating, than on displaying people with disabilities.  Of course, perhaps "KooKoo the Bird Girl," and the younger generation of sideshow performers, would disagree?   Bobby Reynold’s International Circus Sideshow Museum & Gallery closed in 2002, according to Nickell (2005).  Ward Hall and Chris Christ's World of Wonders traveling sideshow was purchased by Thomas Breen and performs now as the World of Wonders Entertainment Experience, part of Family American Magical Entertainment, Inc. (F.A.M.E, Inc.), as of this writing in 2020.  The Canadian-based Carnival Diablo the Ultimate Sideshow has been entertaining audiences since 1992.  “The Jim Rose Circus” held its last performance at the London Burlesque Festival in 2013 (“Visit the Sideshow Exhibit”, 2016).   However, an article by Platt (2014) suggests Jim Rose is still involved in the circus performance arts.   Another venue keeping the tradition alive is the Coney Island Circus Sideshow.  There you can see the fire-breathing Insectavora, contortionist Finn Flexible, and be amazed as the Texas Talker, Nikos Brisco, wrangles in the crowds.  Sideshows can entertain and mystify, but also teach us just what it means to be human. 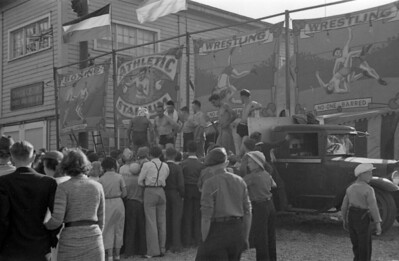 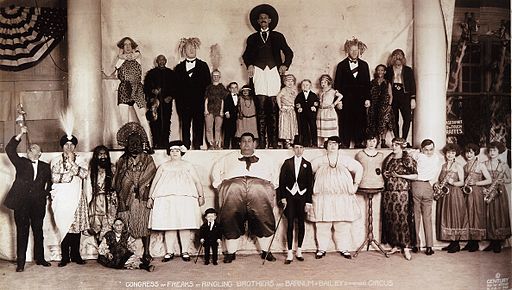 Congress of Freaks from the Ringling Brothers and Barnum & Bailey Circus 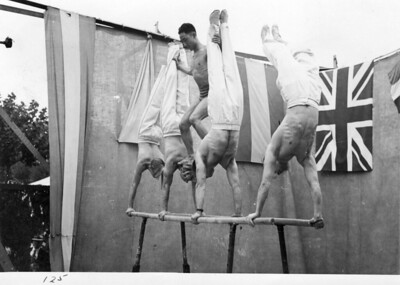 Acrobats in a midway sideshow. 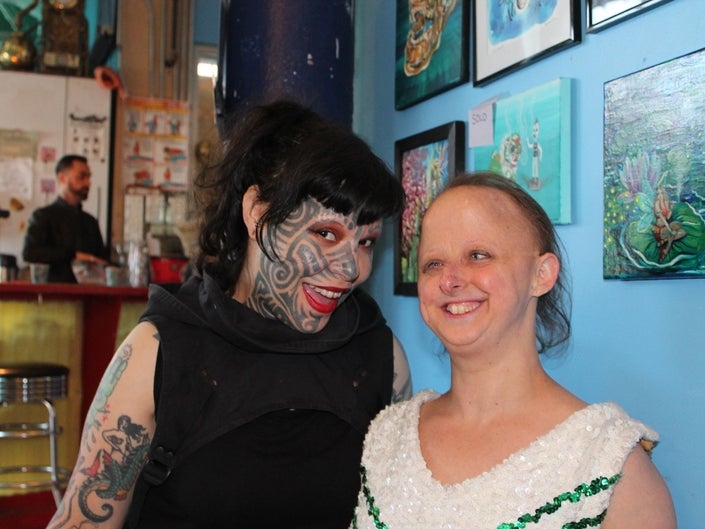 Insectavora and KooKoo the Bird Girl from the Coney Island Circus Sideshow.

Chris Christ (front with green jacket) and Ward Hall (back right, with red jacket), started the World of Wonders Sideshow.