Biographical information, bibliography, and selected links to materials relating to concert pianist and FSU professor Edward Kilenyi (1910-2000) and his family.

Edward Kilenyi, Sr. (born Kilenyi Ede) was a Hungarian-born violinist, composer, arranger, writer on music, and teacher.  His early education was primarily in Hungary, but he briefly studied with Mascagni in Rome and later attended the Cologne Conservatory, from which he graduated in 1908 (according to his diploma; other sources say 1907).

After immigrating to the United States, he apparently attended Columbia University and studied with Cornelius Rybner (or Rübner) and Daniel Gregory Mason.  According to Baker's Biographical Dictionary of Musicians, he obtained a Master's and PhD from Columbia in 1915.  Although Columbia has no record of him being registered as a student, his Master's essay, "The Development of the Violin Music up to the 18th Century," dated 1914, appears in the Columbia University catalog.  A bound copy of that essay (possibly a draft, given the corrections and annotations in both ink and pencil) is in the Kilenyi Archive at FSU.

While he lived in New York he taught composition based on the methods of Percy Goetschius.  It was during this period that George Gershwin came to him to study harmony.  Gershwin's period of study is often cited as 1919–1921, but Susan Niemoyer has shown that the student-teacher relationship persisted until at least 1923.

During that period Kilenyi was also actively creating and arranging music for local theaters; this may be the origin of his association with the Sam Fox Publishing Company, which among other services published collections of short, thematically appropriate pieces of stock music for use by silent movie houses.  In the early 1930s he moved to California, where he continued his work with film music.  He worked on over forty films as composer, conductor, arranger, or musical director, although few were particularly notable with the exception of a 1938 revival of the 1914 Charlie Chaplin film Tillie's Punctured Romance.

In 1950 and again in 1963 he wrote two documents related to Gershwin, in which he sought to dispel the common perception that Gershwin was ignorant of the finer points of harmony and compositional technique.

Kilenyi retired in 1953.  He was suffering from leukemia in his later years, and his son and daughter-in-law persuaded him to leave California and move to Tallahassee in 1965.  He died in August of 1968. 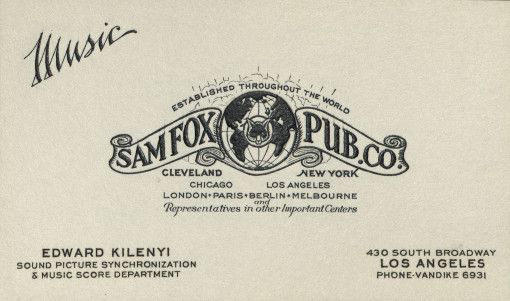