Biographical information, bibliography, and selected links to materials relating to concert pianist and FSU professor Edward Kilenyi (1910-2000) and his family.

Julio Kilenyi was an artist specializing in relief scuptures, medals and plaques.  He was born in Arad, Hungary, and educated in Budapest, Paris, and Berlin.  In 1907 he traveled to Argentina and remained there for nine years before settling in New York in 1916, possibly at the urging of the New York medal collector Julius de Lagerburg.  In 1924 he became a naturalized citizen of the United States.

His works included numerous commemorative items for societies, companies, and local goverment in New York as well as those recognizing events of national or international significance, such as presidential inaugurations and the first transatlantic flight.  He did work for for the Medallic Art Company and  L. G. Balfour, for the latter of which he served as art director from 1949–1955.

His professional memberships inluded the American Numismatic Association and the National Sculpture Society.  He also belonged to the Bruckner Society of America,  holding at the time of his death the posts of Executive Member, Director, and Vice-President.  In 1933 and 1935 he designed medals of Bruckner and Mahler, respectively, for the exclusive use of the society. 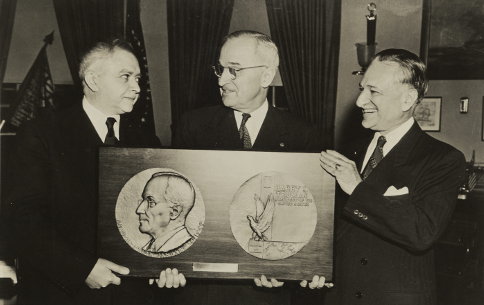 Photograph from the Edward Kilenyi Archive.  Click for full view.