An introduction to the adaptations in the academic publishing model, including open access publishing and archiving, authors rights, and tools and strategies for measuring the impact of research. 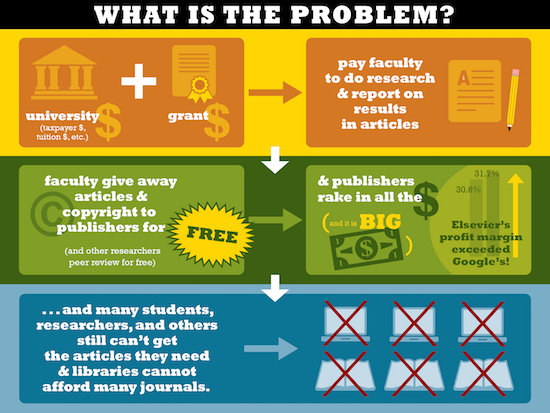 Libraries and the faculty and institutions they serve are participants in the unusual business model that funds traditional scholarly publishing. Faculty produce and edit, typically without any direct financial advantage, the content that publishers then evaluate, assemble, publish and distribute. The colleges and universities that employ these faculty authors/editors then purchase, through their libraries, that packaged content back at exorbitant prices for use by those same faculty and their students. This unusual business model where the "necessary inputs" are provided free of cost to publishers who then in return sell that "input" back to the institutions that pay the salaries of the persons producing it has given rise to an unsustainable system begging for transformation.

The subscription prices charged to institutions has far outpaced the budgets of the institutions' libraries who are responsible for paying those bills. Years of stagnant university funding and the economic downturn rendered many library budgets flat, while journal pricing continued to rise. This problem became known as the "serials crisis." Another element of the serials crisis that has been subject to discussion and debate has been the "big deal," which is when large commercial publishers sell their complete list of titles to libraries at less than what a la carte pricing for titles would be individually. Some postulate that the big deal has helped negate the effects of the serials crisis while others argue that it actually hurts more than it helps.

Over the years, librarians, publishers, scholars, and economists have debated the causes and status of as well as the solutions to the the unusual economic system funding journal publishing and the resulting serials crisis. A primary response to the serials crisis has been the development and grown of open access publishing. Several publishers and groups have experimented with alternative journal publishing schemes.

An article processing charge (APC) is a fee charged by publishers to authors who wish to make a work "open access" in an open access journal or a hybrid journal. Authors must pay this charge prior to publication to help publishers cover the cost of publication for a free and publicly available work.

The amount of the charge varies across journals, publishers, and countries. In the United States, it is not uncommon for APCs to be $1,500 or higher for each article. Unless the author's institution or research funder agrees to cover this charge, the expense will have to come directly from the author.

FSU operated an Open Access Publishing Fund for two years that supported publishing costs for eligible open access journals and books when no alternative funding was available. Although the OA Fund was a measurable success - all funds were exhausted, and a clear demand from faculty for further Open Access publishing support materialized - FSU Libraries is currently considering how to utilize its limited funding to impact the most people in the best way possible.

The Open Access Spectrum was developed by SPARC in collaboration with PLOS and OASPA. This tool displays the core components of open access across a spectrum indicating how closed or open a journal is based upon its policies on reader rights, reuse rights, copyrights, author posting rights, automatic posting, and machine readability.

(Please click on the image above to view full-size.)