Florida has always been Native land and indigenous peoples play an important role in Florida's past and present. One way in which historians explore the history of Native Florida is through the government documents of European and American settlers. These documents are well-preserved because they were seen as important and objective historical documents. Today we recognize that no primary source can be completely objective, and that government documents reflect the biases and motivations of the governments and individuals who created them.

Let's test our skills by analyzing the following government document.

The Superintendent's office, located in the United States Department of War, kept copies of all correspondence sent out in a letterbook.1

These letterbooks are now kept at the National Archives and copies have been digitized and made available online. This letter is from Records of the Office of Indian Affairs, Letters Sent, Volume 3, Image 210.

Try to read the original handwriting by clicking the image to see an enlarged version. This letter is on the right of the two-page book in the image.

In the transcript that follows, I have written out any abbreviated words from the original letter. 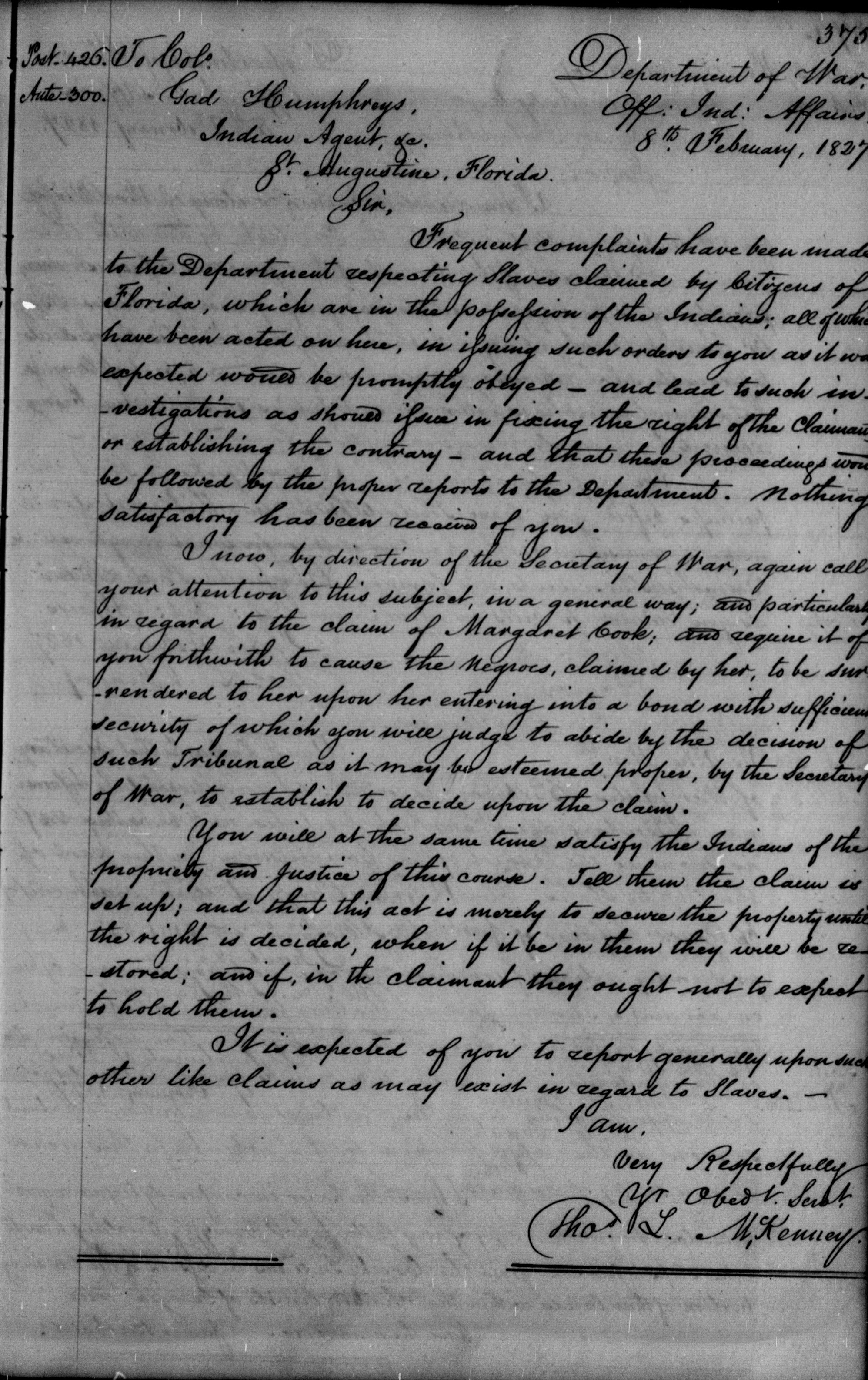 Sir,
Frequent complaints have been made to the Department respecting Slaves claimed by Citizens of Florida, which are in the possession of the Indians; all of which have been acted on here, in issuing such orders to you as it was expected would be promptly obeyed—and lead to such investigations as should issue in fixing the right of the Claimants, or establishing the contrary—and that these proceedings would be followed by the proper reports to the Department. Nothing satisfactory has been received of you.

I now, by direction of the Secretary of War, again call your attention to this subject, in a general way; and particularly in regard to the claim of Margaret Cook; and require it of you forthwith to cause the Negroes, claimed by her, to be surrendered to her upon her entering into a bond with sufficient security of which you will judge to abide by the decision of such Tribunal as it may be esteemed proper, by the Secretary of War, to establish to decide upon the claim.

You will at the same time satisfy the Indians of the propriety and Justice of this course. Tell them the claim is set up; and that this act is merely to secure the property until the right is decided, when if it be in them they will be restored; and if, in the claimant they ought not to expect to hold them.

It is expected of you to report generally upon such other like claims as may exist in regard to Slaves.—

I am, Very Respectfully Your Obedient Servant,
Thomas L. McKenney

Try to answer each question for yourself before clicking to reveal my interpretation.

From the letter itself, we can see that Thomas L. McKenney wrote this from the Office of Indian Affairs in 1827.
We can get some basic biographical information from Wikipedia.

McKenney served from 1816-1822 as Superintendent of Indian Trade, where he oversaw the official fur trading network until it was abolished in 1822. In 1824, then Secretary of War, John C. Calhoun, created the Bureau of Indian Affairs within the War Department to fill the administrative vacuum in Native American relations, and appointed McKenney to the fill the role once again of Superintendent.

What is the government trying to do here?

It seems McKenney has been receiving complaints from Florida citizens who claim that "the Indians" are in possession of their slaves. McKenney refers to an established process for resolving disputes over who owns these enslaved people. However, he appears to accuse Colonel Humphreys, the Indian Agent in St. Augustine, of not doing his job to resolve these claims.

The need to reassure the Indians that this process is "proper and just" suggests not everyone in Florida is on board with the federal government's procedures.

Who was the intended audience for this document?

This letter appears to be private correspondence between McKenney and Colonel Gad Humphreys, the Indian Agent in St. Augustine, Florida. It was unlikely to be shared with the public.

So what do we know about Humphreys? What is his role as "Indian agent?"
As an Indian Agent, Humphreys represented the federal government and was in charge of relations with Native peoples in the area. We can tell from the letter that McKenney expected Humphreys to resolve disputes over slave ownership between white settlers and Native peoples, but that this was not happening to McKenney's satisfaction.

Whose perspective is missing?

We don't know from this letter who "the Indians" are that McKenney refers to, or what they think about these conflicting claims over enslaved humans. We might assume they are Seminoles, but since they are not named in this document, we need corroboration.

We don't know from this letter what the enslaved individuals think about their current situation. What do you think we can infer from this letter, and what other evidence do we need to learn more?

We don't know what Colonel Humphreys has been doing to either resolve or ignore these claims. We only know that McKenney is dissatisfied with the current state of affairs.

We can begin to understand that McKenney is frustrated that the federal government's procedures are not being followed. Why do you think this is frustrating for McKenney?

We can begin to understand that Margaret Cook and other Florida citizens are frustrated that they have lost control over their enslaved workers, and they blame the Indians. Who do you think counts as "citizens" to McKenney, and who doesn't?

How can we find out more?

The letter from McKenney to Humphreys suggests a complex situation in Florida where the United States federal government attempted to regulate relations between white settlers and Native peoples. In this letter, the conflict is over ownership of enslaved Black people. Reading this document generates more questions than answers. Here are just a few questions I have after reading this letter.

To answer these questions and find out more about the situation in Florida in the 1820s, we will need more information.

We can read more government documents, perhaps more correspondence between McKenney and Humphreys. We might also find correspondence from other Floridians who wrote to the federal government, or whose words and actions might have been recorded by government agents.

We should certainly read secondary sources to find out what other historians have discovered about this time period in Florida's history. Existing scholarship helps us to contextualize the primary sources we are reading and will also point us toward other relevant primary sources we may want to examine.

You can learn more about Colonel Humphreys's struggles to mediate among the Seminoles, white settlers in Florida, and his superiors in the United States government over the status of runaway slaves in Kevin Kokomoor's 2008 Master's thesis.

For more on the complex relationships among Black, Indigenous, and white communities in late eighteenth- and early nineteenth-century Florida, see:

"Government document" is a very broad category that includes any information created or collected by a governing body. In the United States, this can include federal, state, or local governments, and includes such diverse types of information as laws, court rulings, speeches, correspondence among government officials, economic data, scientific research, international diplomacy, classified intelligence, feedback from constituents, and much more!

For example, we now know that the United States federal government has long had a direct interest in regulating relationships with Native Americans. The letter from McKenney to Humphreys comes from the records of the Bureau of Indian Affairs. Like many government agencies, the Bureau has had several different names and was at times organized under different executive departments. Wikipedia is helpful for tracing the name and organizational changes.

Despite the name changes, the majority of historical records created or received by the Bureau have been kept together. Most are in Washington, D. C. at the National Archives. Others are located in regional offices around the country.

Other collections of government documents that may be include large number of documents relating to the history of Florida include:

Strozier Library also holds a large print collection of government documents created by the State of Florida. These are in the compact shelving in the Scholars Commons, on the lower level.

The best place for state documents, however, is the State Library and Archives, located in the R.A. Gray Building at 500 South Bronough Street, a short walk from the FSU Libraries.