Maps can be exciting primary sources. Maps are a special class of visual artifact, representing not just geographic space, but often the strategic, commercial, cultural, or imperial interests of its creators, just to name a few. As described in an exhibit by the Newberry Library, "a map is not a direct image of the physical world, but one constructed by the mapmaker’s knowledge, the conventions of mapmaking, cultural and social influences, and the intended audiences of the final product.  In this way, maps suggest the ways their creators’ and users’ understood the nature of their society, the course of time, and their place within a landscape."1

The following map is titled A compleat map of the West Indies, containing the coasts of Florida, Louisiana, New Spain, and Terra Firma: with all the Islands. The FSU Libraries has a print copy of this map in Special Collections & Archives, so you could consult the original at Strozier Library. The image here is digitized from a copy at the United States Library of Congress. 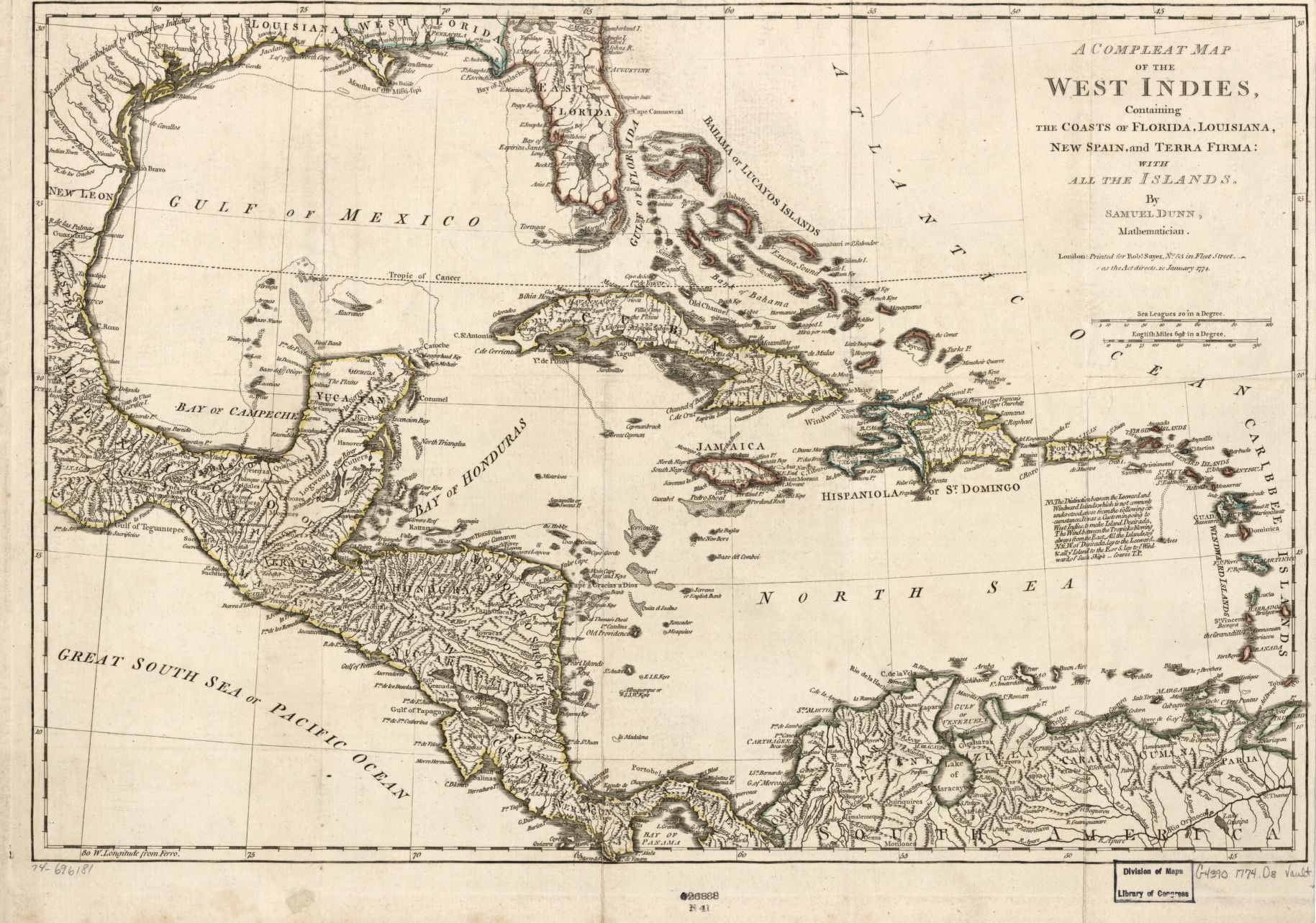 Next we will ask ourselves some specific questions about the parts of the map.

Scroll through the slides using the arrow button at the right.

Note that this map centers the islands of the Caribbean, suggesting they are the most important part of the map. The surrounding coasts of North and South America are included.

Florida is relatively small on this map, at the top edge of the page. Note that there are two Floridas: East Florida and West Florida. 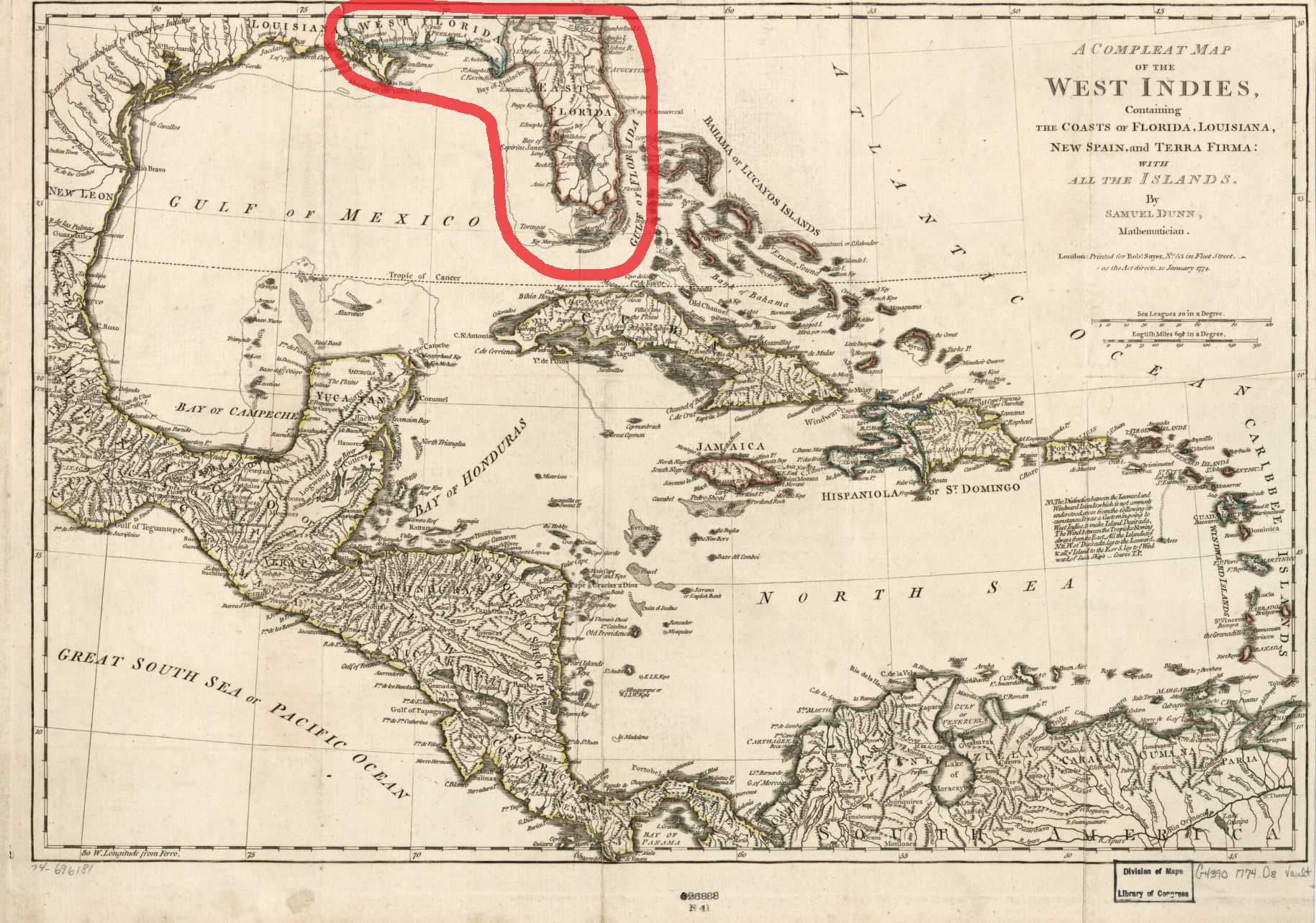 No map can label everything and still be legible, so map makers make choices about what information must be included and what can be ignored. These decisions often relate to how the map is intended to be used.

All of the Caribbean islands are labeled, as well as many towns, rivers, and other water features.

A few cities are labeled in all capital letters, perhaps signifying size or importance. Two examples are noted with blue rectangles here.

Did you notice in the upper left corner, over modern day Texas, the phrase "Extensive Plains inhabited by Wandering Indians"? It's circled in red on this slide. 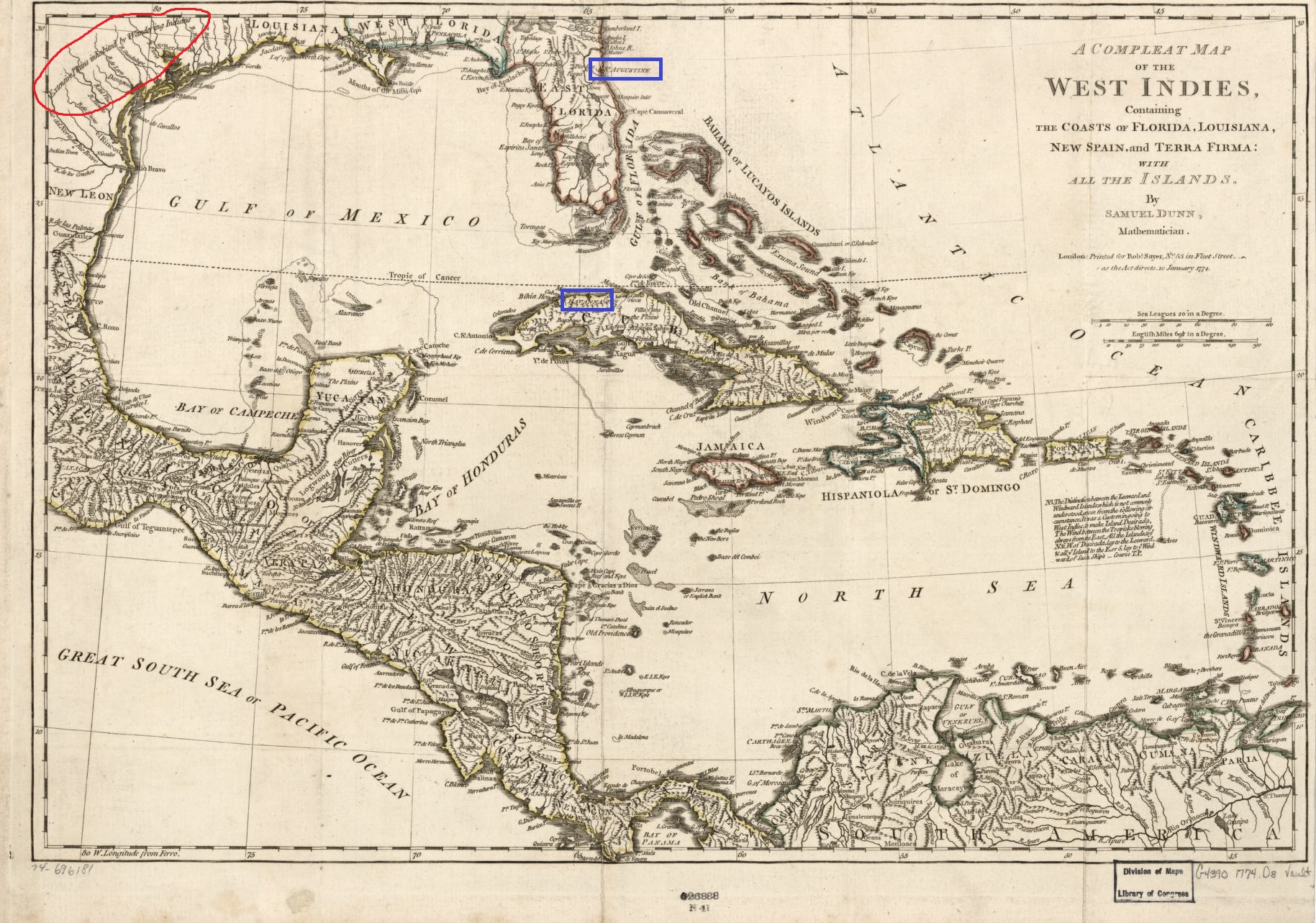 The symbols used on this map are not described in the legend.

Clusters of dots are used indicate reefs and shoals. There are also dotted lines around some islands and shorelines, perhaps designating shallow waters. A few examples are circled in blue on this slide. This might have been important information for ship navigation. 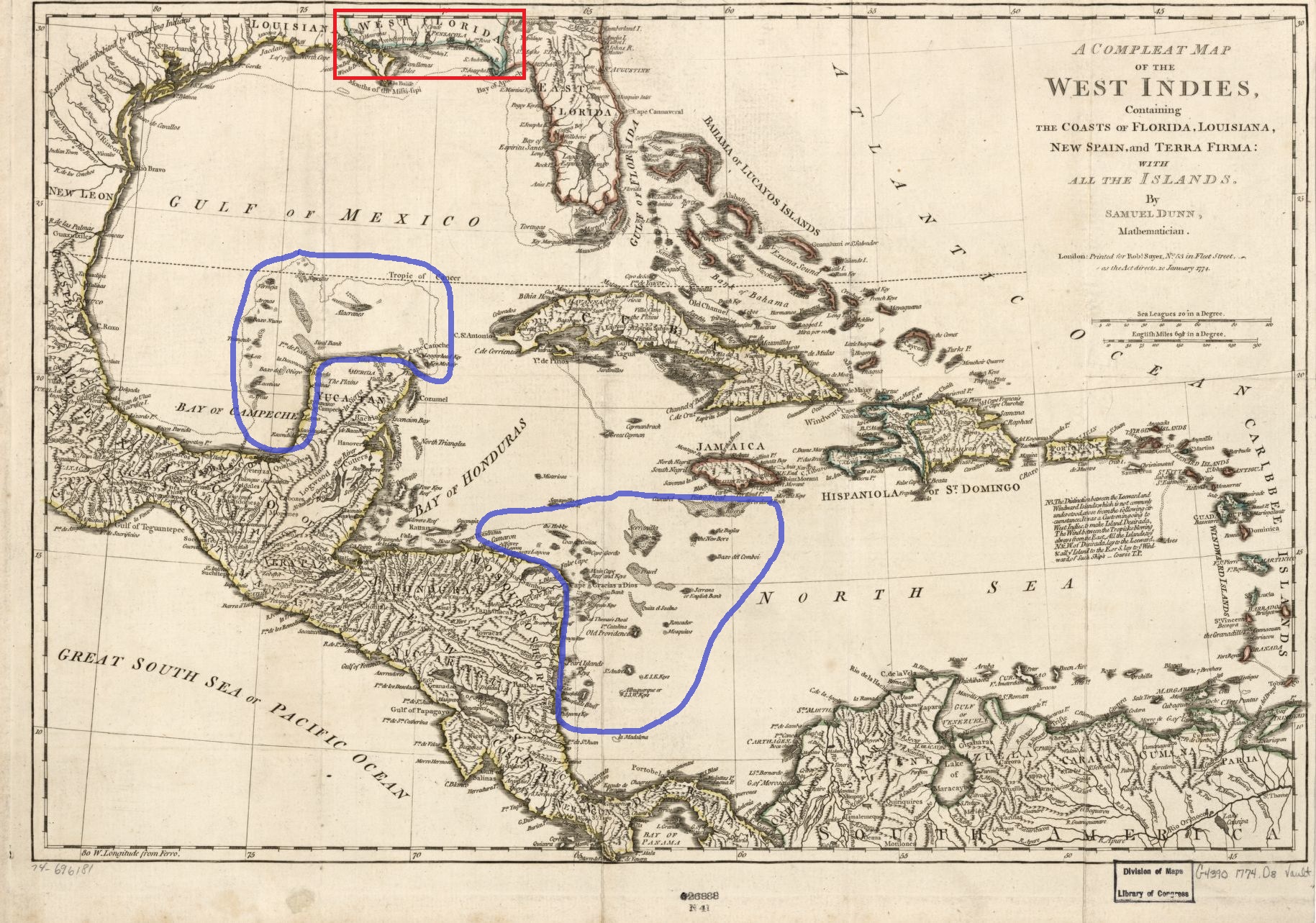 Knowing who created a primary source is important for understanding its meaning and purpose.

In the legend, located in the upper-right corner, outlined in red on this slide, we see that Samuel Dunn, mathematician, is credited with drawing this map.

We can learn more about Dunn on his Wikipedia page.

If we do a bit of exploring about Dunn and his works, we find that this map of the West Indies was included in his 1774 publication A New Atlas of the Mundane System. You can view a digitized copy of the second edition of this book on the New York Public LIbrary's website. 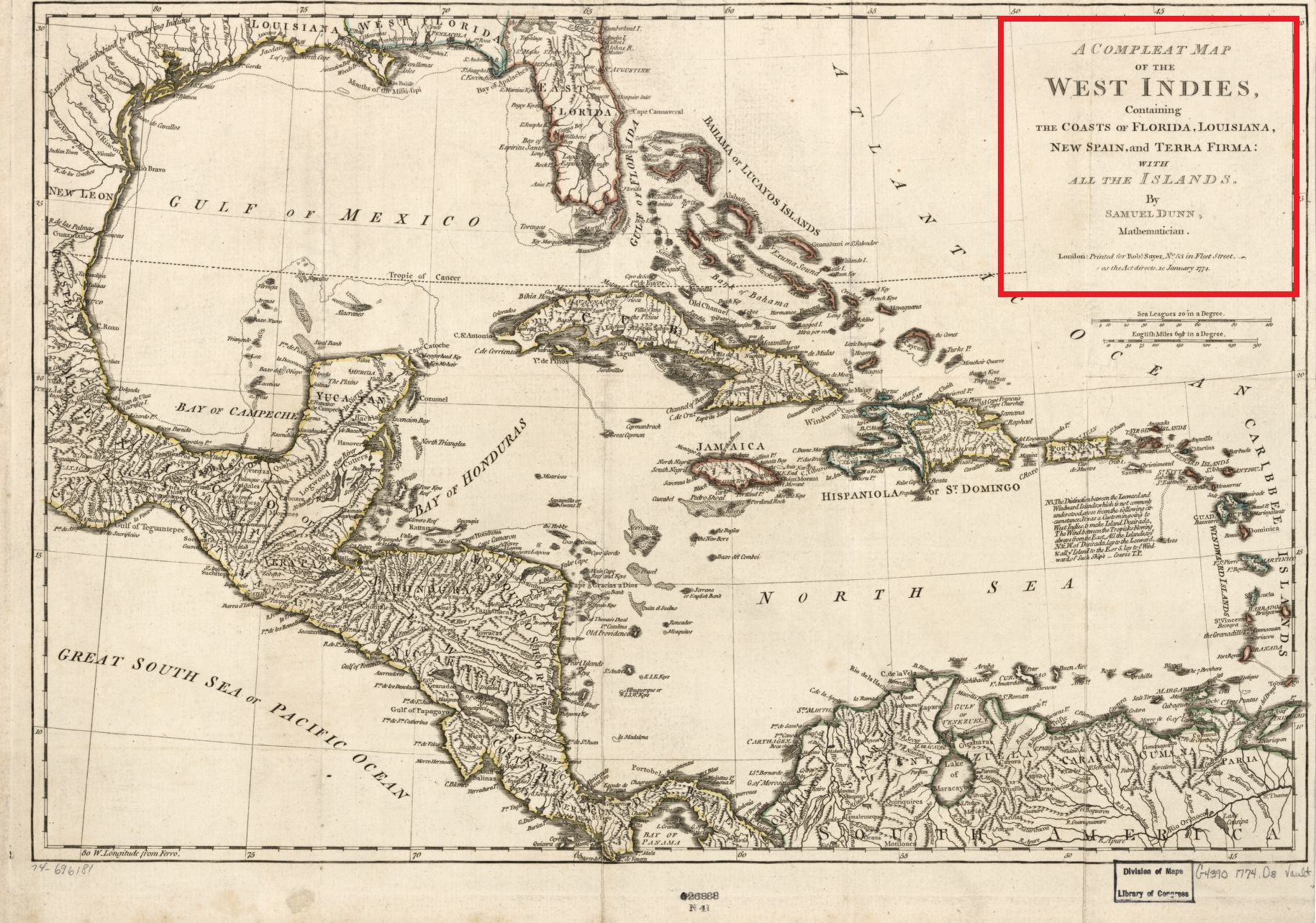 The legend provides this information as well. A red arrow points to the date in this slide. This map was published in 1774 in London for Robert Sayer, a publisher and seller of prints, maps and maritime charts.

As noted above, this map appeared in Dunn's New Atlas of the Mundane System, published in 1774.

It also appears in a collection of maps published in 1776 in the book The American military pocket atlas; being an approved collection of correct maps, both general and particular; of the British colonies; especially those which now are, or probably may be the theatre of war. 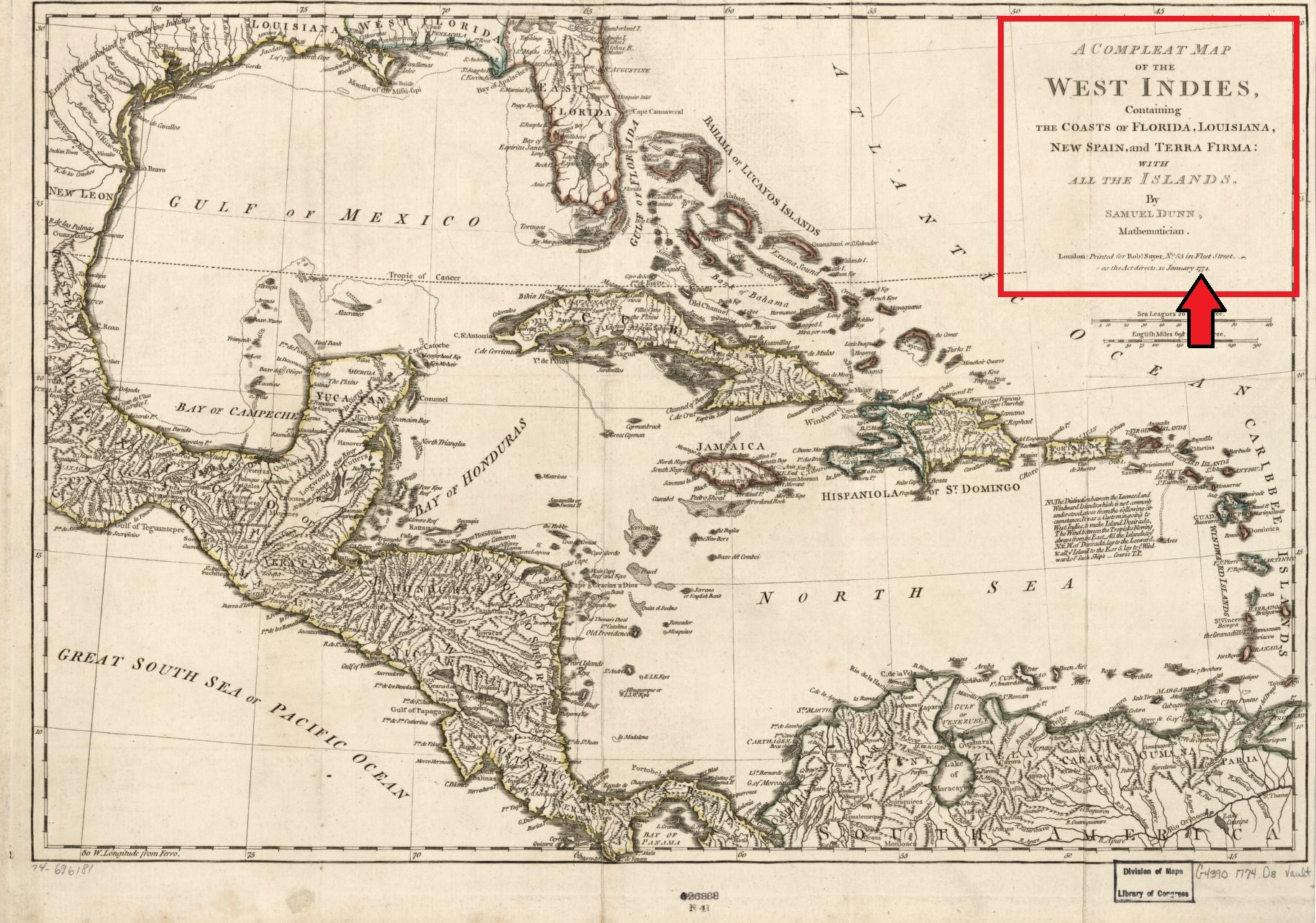 Where to Find Maps of Florida

As we learned above, maps may be published in atlases, or included in books about more general topics, like military campaigns, the environment, or political change, to name a few. Consider searching for atlases that might include maps of Florida produced during the period of history you are researching.

Additionally, here are some digital collections of maps that may be useful.

For more on maps of the Southeast before the American Revolution, see:

1. Regrettably, the exhibit "Frontier to Heartland" is no longer available online. This quote was taken from the now defunct webpage at https://publications.newberry.org/frontiertoheartland/exhibits/show/perspectives/historicmaps. A short description of the exhibit was still available at https://www.newberry.org/frontier-heartland as of April 2021.