Guiding questions and other tips on how to read and interpret travel writing come from the work of Jerry Bentley created for the World History Sources project, sponsored by the Center for History and New Media, George Mason University, with support from the National Endowment for the Humanities and the Gladys Krieble Delmas Foundation © 2003-2005.

On this page we consider travel writing, a broad category that includes books, pamphlets, and other works written by visitors to Florida. Unlike personal diaries or private correspondence, travel writing was published and intended for a reading audience. This is important to remember when interpreting this type of primary source.

One of the most interesting things about travel writing for historians is what it reveals about the writer. Certainly travel writing can be useful for the information it provides about Florida, its people, and the natural environment, but travel writers are not objective, unbiased narrators. They arrived in Florida with their own cultural perspectives, expectations, and agendas. By thinking critically about the authors, we can carefully retrieve information about the past and the ways in which historical actors understood (and misunderstood) Florida.

As you read examples of travel writing, ask yourself the following questions:

Below is an excerpt from Alonso Gregorio de Escobedo's epic poem, La Florida, which scholars believe was written after Escobedo had returned to Spain, sometime between 1598 and 1615. La Florida is written in verse, a popular genre of the time. You will notice the meter and rhyme if you read the original text in Spanish. The following excerpt is from Canto 27.

The original manuscript is in the Biblioteca Nacional in Madrid, Spain, and has been digitized. An annotated Spanish edition was published in 2015 by Alexandra E. Sununu. The English translation provided here is by Thomas Hallock, edited by Mikaela Perron, part of the Early Visions of Florida project at the University of South Florida.

The page numbers follow the original manuscript, where each numbered page has both a recto and a verso. Recto is the front of the page, and would appear on the right side of a bound book. Verso is the back, or reverse, of that page number, and would appear on the left of a bound book after turning the page. Thus we read in order, 336 recto, 336 verso, 337 recto, 337 verso, etc. I have included a digital image of the 336 verso and 337 recto pages as they appear in the original manuscript. Transcripts follow the image, with the English and Spanish versions of each page shown side by side. 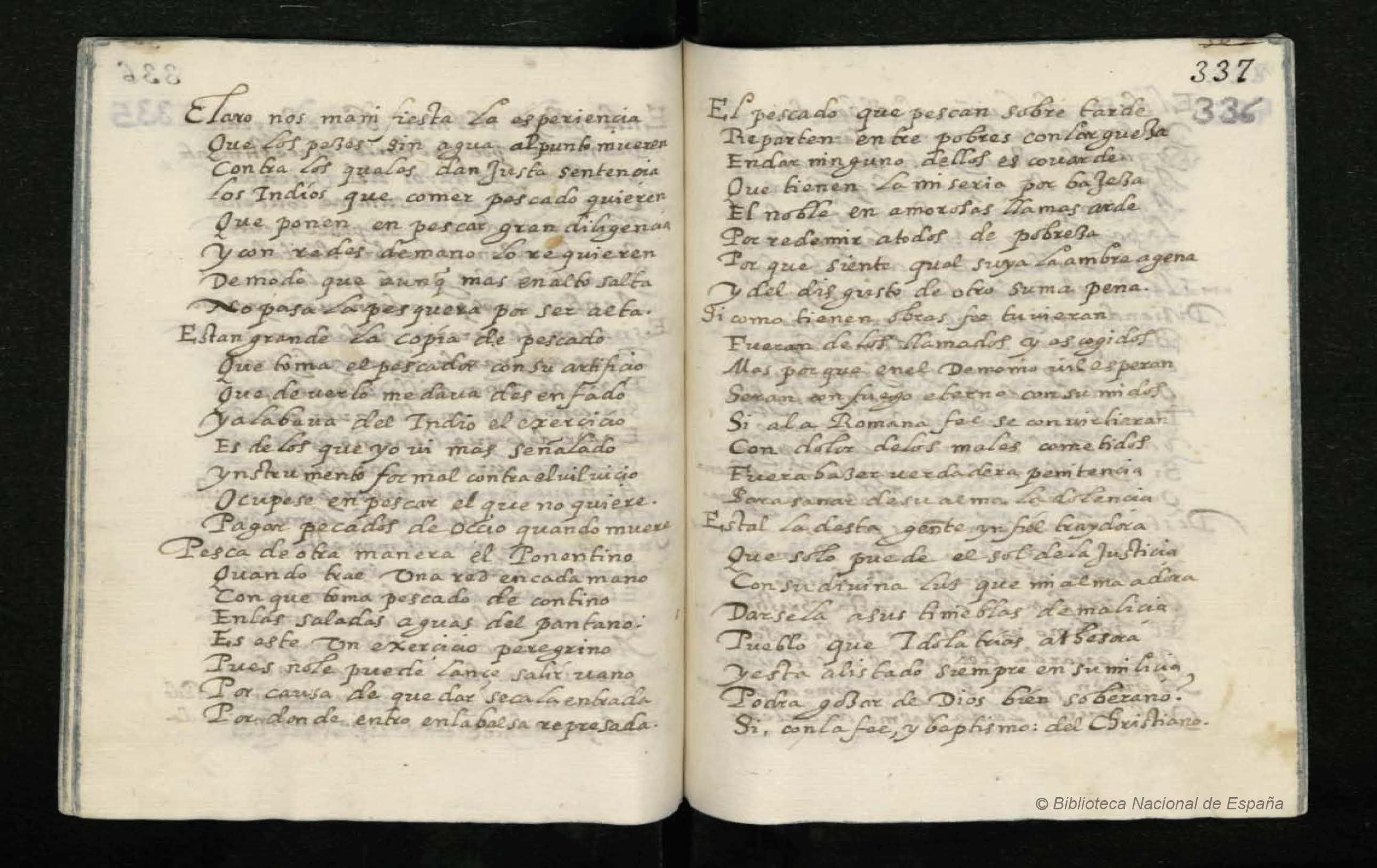 (336r)
These people live on the beach by the sea,
naked, lacking any kind of clothing,
dressed only by morning rays from the East,
whose warmth gives them all their peace;
but without God, their minds are impoverished,
and lacking the reason given to man,
they dress as they please, jumping in
to swim with the fish at any new test.

It is a fearless nation, and made as such
that with great strength and swiftness,
they swim from the river to the sea,
without showing any sign of fatigue.
In what they have, they do not make
small gifts; in virtue only are they lacking,
and while they are great fishermen
they are not righteous themselves.

When the tide is coming in,
a number of the skillful Indians
enter into the water to start their fishing;
and as the sun sends its light to the earth,
armed with spears, they form a living bridge
that reaches from one side to the other,
and as the water rushes back to the sea,
the fish are left there on the dry flats.

(336v)
Clearly, as experience shows us,
fish out of water quickly die, these are
the laws of He who gives sentence;
the Indians who want to eat seafood
show great diligence in their fishing,
and with the use of handwoven weirs,
that are made just high enough
to keep the fish from jumping out.

The number of fish is so great,
that the Indians take with their skill,
that to see it puts me at ease,
and I must praise them for their efforts.
It is one of the best things I have seen
to show a proper instrument against vile vice,
to occupy themselves in fishing, for those who
choose not to atone for idleness upon their death.

The ponentinos have another method,
where they take the net in each each hand,
taking in their catch with a continual motion,
trawling through the salty, brackish flats.
Wandering like pilgrims in this way,
the fish cannot escape because
of the dry spot in the narrow gate
they have built in the shallow pools.

(337r)
In the afternoons the generous fishermen
they share their catch amongst the poor.
In so doing, none of them are cowardly,
none of them act misers to the poor.
The beloved nobleman burns with a flame
that rescues and redeems those in need,
because he feels the hunger of those afar,
and the suffering of another is his own.

It is as they had objects of faith,
these lost souls would then be found,
but because the vile devil awaits them,
they will find themselves nestled in eternal fire.
Were they to convert to the Roman faith
the wages of the sin they have committed
would be absolved by true penance,
and their souls cleansed from sorrow.

It is so that these traitorous infidels
who have been kept in shadowy darkness,
with the delight that my soul adores,
may be brought to the light of justice.
Can a town that treasures idolatry,
and that is always lined up for war,
in the sovereign God find solace?
With baptism and the Christian faith: Yes.

Try answering each question for yourself before clicking to reveal my interpretation.

Who is the author?

Most of what we know about Alonso Gregorio de Escobedo comes from his epic poem, La Florida. As summarized in the Diccionario Biográfico Español, we know Escobedo was a Franciscan missionary who arrived at St. Augustine, Florida, in 1587 and spent 10 years there among the Timucua people. He wrote La Florida after he returned to Spain. He died there in 1610.

As a missionary, Escobedo's reason for traveling to Florida was to convert the indigenous people to Catholicism. Even from this short excerpt we get a strong sense of Escobedo's religious perspective. While he seems to marvel at the fishing skills and generosity of the Timucua that he observes, he also labels them "infidels" and considers them lost to eternal hellfire unless they are baptized.

What topics does the author think are worth discussing? What seems to be left out?

We can't tell all that might be left out of Escobedo's narrative from just this brief excerpt, but we do get a sample of his interests here. He describes the fishing techniques of the Timucua in some detail. Since Escobedo could observe the fishing technique directly, there seems to be little chance that he misinterprets the Timucua fishing methods. However, there is much Escobedo may not have fully understood. Why did the Timucua fish in this way? Were there spiritual, social, or political reasons for using this fishing technique at this particular time and place? Why were certain divisions of labor practiced? Escobedo could see what the Timucua were doing, but he may not have grasped the cultural aspects of this practice.

Also, note how Escobedo couches his description in moral terms, lauding those who fish for their productivity. In contrast, those who are idle are considered sinful. Escobedo seems to be imposing his own values about labor onto the Timucua.

Do you think Escobedo's opinion on the indigenous people's work ethic is related to the Spanish conquistador's search for laborers?

What influence has the travel account had during its own times? Did it continue to have an influence in later times, or even today?

This question is hard to answer based solely on the text. With a bit of research using secondary sources about Escobedo's La Florida, I learned that the author and the poem were little known in their own time. It was never published--it existed only in manuscript form--so it was probably not widely circulated or read. However, it is very similar to other accounts written by Spaniards during the early decades of conquest and colonization. We would need to read more about these other accounts and the impact they had on Spanish readers and Spaniards' subsequent efforts to establish missions and further colonize the New World. Today, a critical reading of La Florida may help us to understand daily life among the Timucua, using Escobedo's observations alongside other textual and archaeological sources to learn about sixteenth century fishing practices and other activities.

How to Find Travel Writing about Florida

Because travel writing most often takes the form of a published book, you can find many examples of travel writing by searching the library catalog. These works often have one of the following "subject headings," or tags, attached to them:

Combine any of these terms with a geographic place to find travel writings about that place.

Try searching for "Florida," "Southern States," or "West Indies" along with one of these subject headings.

It's important to note that these tags used in library catalogs are in many ways out-dated. The seemingly harmless phrase "discovery and exploration" actually describes books about violent encounters between European military expeditions and the indigenous peoples of the Americas, Africa, and Oceania. We may have to use these phrases to find books in this category, but with our skills as historians we are equipped to read these sources critically.

The Early Visions of Florida website, from which we borrow Thomas Hallock's translation of Escobedo's La Florida, provides an excellent bibliography of travel writing about Florida from the first arrival of the Spaniards to the mid-nineteenth century.

You will also find digitized examples of travel writing in the following databases licensed by FSU Libraries:

Many scholars have examined the ways in which travel writing has contributed to the exploitative projects of 18th, 19th, and 20th century empires. As the author of this guide, I am also influenced by this scholarship. When travel writers described a place as backward or primitive, they helped to justify conquest and colonization in the name of spreading "civilization" and "modernity." For example, the conquistadors that described Florida did so as part of their personal and imperial interest in acquiring land, slaves, and valuable resources. Spanish missionaries documented the languages and cultural practices of indigenous peoples in order to more easily convert them to Catholicism.

The following books have helped me to think about travel writing as both a complicated primary sources and a tool of imperialism.