What is a newspaper?

We may think of newspapers as sources of objective reporting on current events, but they are so much more complex! Newspapers record historical events, but they do so in a way that reflects the concerns, opinions, and debates of their communities, which may be local, national, or international. Furthermore, a newspaper is also a business, a platform for advertisements, and a commodity for sale. Thus, while we can rely on newspapers to relay the latest news of its time and place, that news is a filtered version of everything that happened, framed in such a way to meet both the goals of the paper as a business and to capture the attention and interest of a target audience of readers.

When interpreting newspapers, consider the following:

This method of newspaper analysis is adapted from:

Let's test our skills by analyzing the following front page of a historical Florida newspaper.

Here is the front page of the Morning Tribune, a newspaper published in Tampa, Florida, from June 4, 1898. FSU Libraries provides access to historical issues of this newspaper to current FSU students, faculty, and staff through our subscription to ProQuest Historical Newspapers: U.S. Southeast Collection.

Click the image to open a PDF that allows you to zoom in on the image. The PDF is also full-text searchable. 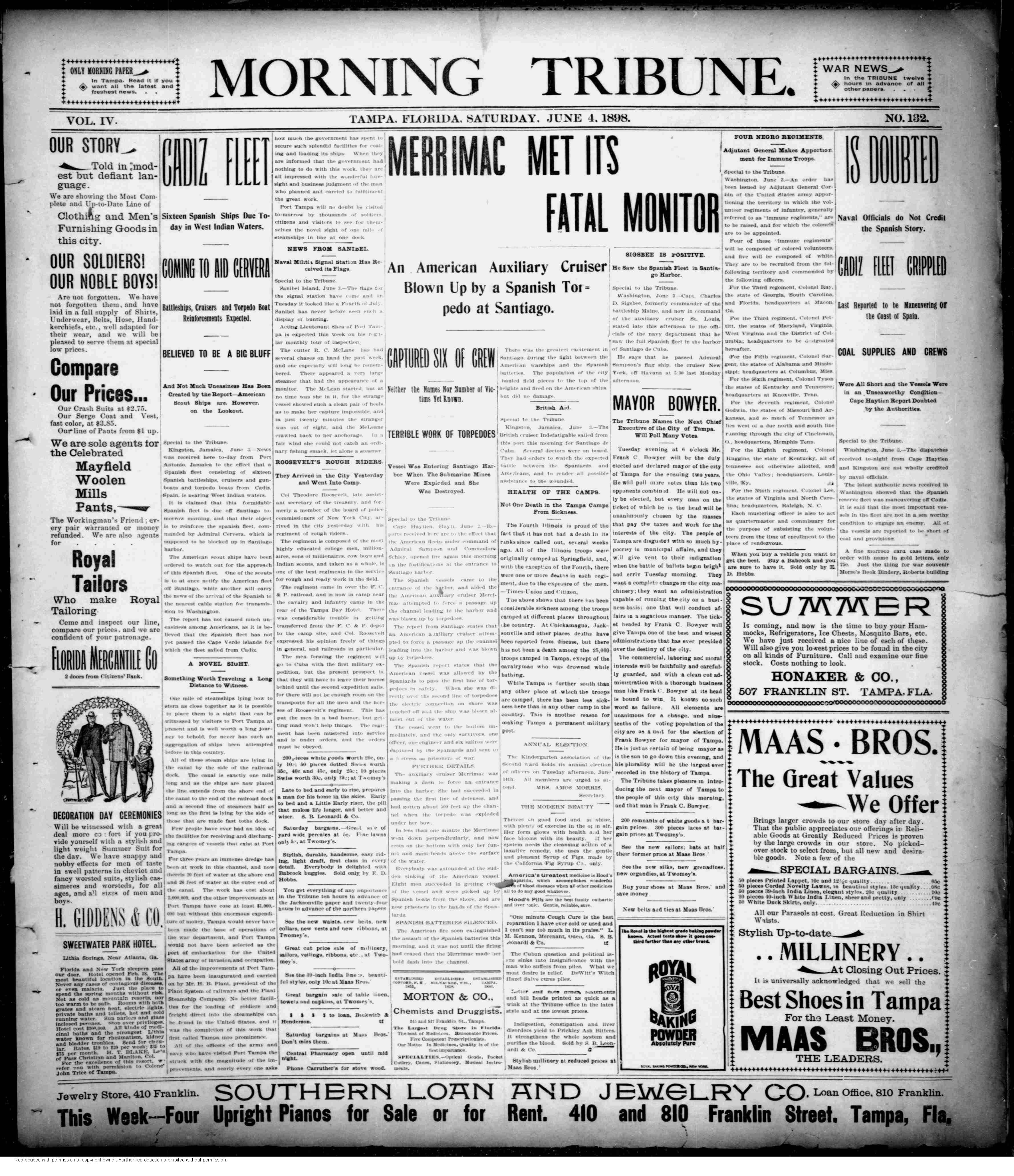 Try to answer each question for yourself about the social context, format, and content of this newspaper page before clicking each question to reveal my interpretation.

What do we know about the Morning Tribune?

The Library of Congress Chronicling America website is an excellent resource for determining publication information about historical newspapers. There we learn that the Morning Tribune was published daily, except Mondays, from 1897 to 1904 by the Tampa Tribune Publishing Company. As is often the case with newspapers, the Tribune began earlier, in 1895, and lasted until 2016, but the name of the paper changed a few times over the years. This is important for researchers to know; every time a newspaper changes name, it gets a new entry in library catalogs and may get digitized into different databases.

We can also see that W. F. Stovall is listed as the editor while the paper was called the Morning Tribune. With a quick Google search, we find Wallace F. Stovall: A Publisher's Publisher, a laudatory history of Stovall written in 1949 by a former colleague of his at the Tribune. The book was digitized by the University of South Florida. While we should read this history critically given it was written to praise Stovall, we do learn the basic timeline of Stovall's publishing career. Of most interest, perhaps, is Stovall's intense rivalry with the Tampa Times, which may help us to better contextualize the news coverage of the Tribune. We also learn that Stovall opposed a major cigar workers strike in 1910, which gives us a sense of his labor politics.

The Wikipedia entry for the Tampa Tribune is also helpful for filling out this publication history.

What do we notice about the layout of this newspaper page?

After the masthead, which includes the newspaper title and date, we see that the page is organized into eight columns. Some major headlines, like "Merrimac Meets its Fatal Monitor," span multiple columns and use larger font sizes to draw the readers' attention.

Some article titles, even when confined to a single column, have larger font sizes than others, perhaps to highlight their importance or capture readers' (and newspaper buyers') attention. Compare the size of headlines for "Cadiz Fleet" in column two and "Roosevelt's Rough Riders" in column three. Would you have prioritized these titles the same way? Why do you think the Tribune used larger font for the Cadiz Fleet than for the arrival of Teddy Roosevelt?

We can also see several advertisements on this page of the newspaper. The entire first column is made up of advertisements with relatively large font sizes, as are the lower right corner of the page and the entire footer.

What topics are being covered in this day's newspaper?

The news on June 4, 1898, is dominated by the war with Spain. The Spanish-American War, as it is often called in the United States, was part of the larger Cuban independence movement of the late-nineteenth century. Articles in this issue of the Tribune report on the sinking of the USS Merrimac in the harbor at Santiago de Cuba, reported movements of the Spanish navy, and US military preparations taking place in Tampa.

In column five, "Health of the Camps" is an interesting story that reports on the relative lack of disease among certain regiments stationed in Tampa, but also uses this information to advocate for Tampa becoming a permanent military post. How common was disease in late nineteenth-century Tampa? Was Tampa in competition with other cities to host military installations, and benefit from federal investments in infrastructure and the economy?

Another article of potential interest is "Four Negro Regiments" at the top of column seven. The report describes efforts to raise "immune regiments," both white and Black. While not the subject of the article, it reveals that the military was racially segregated at the time. We may want to explore the nature of race relations in the military and in Tampa during this era. The article doesn't define what an "immune regiment" is; this suggests it would have been common knowledge to the Tribune's readers. Based on the previous article about sickness among the troops, and what we know about the Spanish-American War, we can infer that the military wants to recruit troops who are immune to tropical diseases like yellow fever. What did scientists or the public know about yellow fever in 1898?

Next we take a closer look at selected articles on this page for further analysis.

What underlying point of view do you detect while reading "A Novel Sight," which starts at the bottom of column two?

This article marvels at the large number of ships docked at the Port Tampa and describes the three years of dredging that made the port's development possible. The article goes on to credit H. B. Plant as the driving force behind this development and celebrates the fact that it was Plant, and not the government, that sponsored these improvements. Such friendly press for Plant suggests that the Tribune was an ally of Plant and generally in favor of private investment in Tampa's development.

How important do you think developing Port Tampa was to the growth of the city at the turn of the century? What role did the Spanish-American War play in Tampa's growth and development?

What kind of article is "Mayor Bowyer," in the middle of column six?

Although it is located in the middle of war reporting on the page, the "Mayor Bowyer" article seems more like an editorial and endorsement of Bowyer's candidacy. Somewhat confusingly, the article is written as though the paper is predicting the future, a future in which Bowyer wins by a landslide. This may just be the writing style of the time period. The paper claimed to endorse Bowyer because he was a "clean cut" and "thorough businessman," and clearly opposed the incumbent city administration, which the paper accused of hypocrisy and incompetence.

What else do you want to know about mayoral politics in 1890s Tampa? Where would go to learn more?

What do you notice about the advertising on this page?

The advertisements on this page reveal the good and services being marketed to readers of the Tribune. In column one, we see large ads for clothing which seem to use patriotism as part of their marketing campaign.

At the bottom of column one is an ad for a hotel in Georgia that seems to market to travelers between New York and Florida. The hotel lists several amenities, like "electric lights, private baths and toilets, and hot and cold running water." How new were these technologies in 1898? The hotel also makes claims about the healthfulness of the climate and nearby springs. This along with the other ads for medicines give us a sense of the public's ideas of health.

What other interesting features of the advertising do you notice?

To learn more about Tampa during the War of 1898, we may want to read the works of historians as well as corroborate the Tribune's coverage with other primary sources.

For example, we know that editor Stovall had an intense rivalry with the Tampa Times. Perhaps we can compare coverage of the war, Tampa politics, and city development projects in the Times. There were also Spanish-language newspapers published in Tampa, catering to the Cuban and Spanish immigrants who worked in the cigar factories. How did their coverage of the war and local politics compare?

We might also consult documents from the War Department. These might provide further details about the selection of Tampa as the main port of embarkation for the United States army, about the logistics of moving troops in and out of the city, and relationships between the federal government and local leaders.

Newspapers are organized by their place of publication, so the best way to find them is by city, state, or country. For newspapers in the United States, the Library of Congress's Chronicling America is the best resource to discover the newspapers that were published across the country. As we saw with the Morning Tribune in Tampa, name changes were very common. The Library of Congress records each name change as a separate entry, but the description of each paper usually includes a note on the previous or succeeding titles.

You can also discover newspapers by searching the library catalog. Combine the city, state or country you need along with the keyword "Newspapers" and you should get a list of available newspapers, both on microfilm and digital. Look for the dates of publication to determine which newspapers will cover the time period you need.

Keep in mind that newspaper coverage about Florida doesn't have to be published in Florida. In fact, there were very few Florida newspapers until the mid-nineteenth century. Consider looking in other important newspapers of the time for mentions of Florida. For example, during the colonial period, you might find important coverage of Florida in the newspapers of Charleston, South Carolina; Philadelphia, Pennsylvania; London, England; or in major population centers of the Caribbean like Cuba or Jamaica.

Digitized newspapers are spread out across multiple databases, some of which FSU Libraries pays for, others are made available for free. Sometimes even the same newspaper title can be split among two or more databases, with older dates in one resource and newer dates in another! Pay attention to the newspaper titles and date ranges provided by the following databases.

It is important to recognize that newspapers are not public services; they are businesses that sell their product and provide advertisers with access to a target audience. Throughout American history, that audience has consisted mostly of white, middle- and upper-class readers. As a result, members of marginalized groups often maintained their own newspapers to provide news and advertising to their communities. There have been many such newspapers in Florida, catering to Black, Latinx, Jewish, and other reading communities. The Seminole Tribe of Florida also maintains a newspaper, the Seminole Tribune, published in Hollywood, Florida.